We might be deep in the dog days of summer, but advertisers have been busier than ever producing some stunning new work.

This month’s ad roundup features a playful branded stunt that could really only work in summer (tequila fountain, anyone?), a set of billboards that change depending on the weather and traffic forecasts, and a refreshingly funny, star-studded flight safety video from British Airways. Let’s dive in.

10 of the Best Ads from July

In this Jung von Matt-produced spot for Hyundai’s luxury line Genesis, a resourceful chauffeur faces off with a snobby socialite and her fluffy, obnoxious dog Kevin. Bringing new, hilarious meaning to the slogan “Excellence worth protecting,” the spot is part of a global campaign to forge a new, higher-end identity for the automaker.

2017 has arguably been the year of “sadvertising” — ads that make us cry, but have nearly nothing to do with the product they’re peddling. Taco Bell teamed up with Toronto-based agency Grip Limited to parody the now-ubiquitous format with the not-so-sad story of two dudes who haven’t hung out in six days.

“Because of our disdain for that kind of ad, we started to subvert it and say ‘How would Taco Bell do this trope?’, ‘How would we stand out and maybe give our consumers a little credit?’” associate creative director Trevor Gourley said to Adweek. “The end result was, we think, a pretty faithful send-up of these sort of paint-by-numbers tearjerkers that are becoming so common in advertising.”

Taco Bell – Better Together from Jesse Hunt on Vimeo.

Director Johnny Green and Goodby Silverstein & Partners present a stunning, empathetic portrait of childhood ADHD in this short film for The Specialized Foundation, a non-profit focused on ADHD-research. The ad features a real group of students with ADHD as they ride through the night on bikes, releasing caged energy and finding a new sense of focus through physical activity.

SNL-alum Kristen Wiig brings her unique brand of delightfully unhinged weirdness to her first ever national ad campaign for Pizza Hut, portraying “every man, woman, and child in America.” Developed by Droga5, the ad finds Wiig in character as everyone from a grizzled cowboy to an excitable teenage girl.

To promote the animated film The Emoji Movie, a crop of weather and traffic-responsive billboards are popping up in major cities around the US. If the weather was sunny, a pleasant sun glasses emoji would appear. If the weather or traffic was crappy, commuters would see a poop emoji on the billboard — naturally.

Critics might not have loved the movie itself, but this stunt — orchestrated by Lamar Advertising — was an undeniably creative spin on outdoor ads.

6) Fruit of the Loom

How do you sing the praises of a really awkward product? Well, according to this new CP+B-produced spot for Fruit of the Loom, you just keep your mouth shut. Their new line of breathable underwear is so good you’ll want to talk about it — but as the ad pleads, please don’t. You’ll make everyone around you terribly uncomfortable.

With the seventh season of HBO’s Game of Thrones underway, advertisers are attempting to cash in on this massive pop culture phenomenon. To highlight their country’s part in the making of the show, Tourism Ireland worked with Publicis London on their second GoT-related stunt: a 250-foot medieval-style tapestry depicting the entire plot of the HBO show’s first six seasons.

If you aren’t ready to take the trip across the pond to check out the tapestry in person, you can check out a digital version here.

To celebrate National Tequila Day this month, Jose Cuervo set up three tequila-dispensing water fountains in downtown Los Angeles. Orchestrated by CP+B, the stunt gave 300 lucky passerby the opportunity to sample Jose Cuervo Silver — directly from a projectile spout. To keep things legal and under control, there were reps on the premises to check IDs. 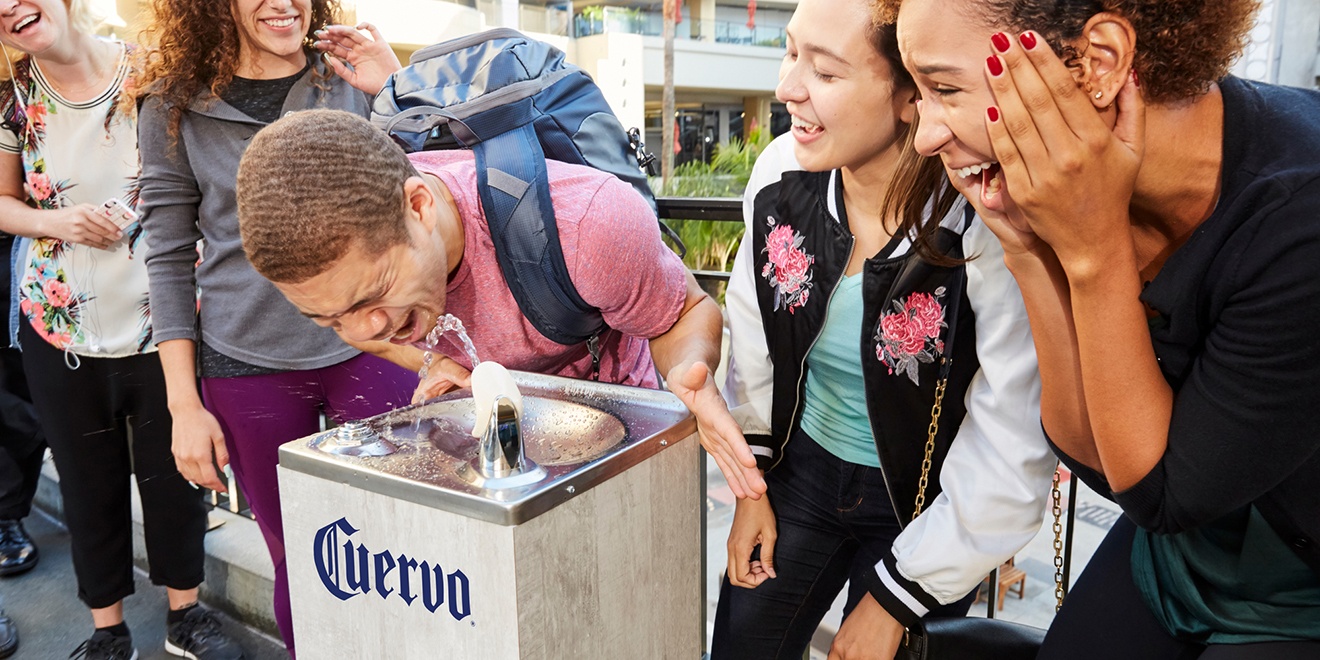 How do you keep people interested during one of those typically dry and repetitive flight safety videos? If this new attempt from BBH London for British Airways is any indication, adding a bunch of British celebrities to the mix certainly doesn’t hurt.

Back in March, Tesla extended an open invitation to fans to develop their own ads for the revolutionary car. This month, Elon Musk named this low-budget ad from Marques Brownlee, aka popular tech YouTuber MKBHD, as the winner.